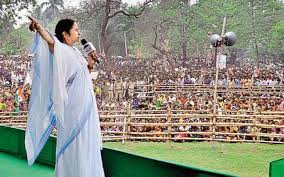 Prime Minister Narendra modi lashed out at the opposition parties saying their alliance is nor against me but against the people of India. Addressing a rally in Gujarat’s Silvassa, Modi said that currently they (opposition parties) are not even properly together and already have started bargaining for their share.

“In Kolkata, people are seeking help to save themselves but here, I am with you to take the country forward. My actions against corruption have infuriated some people. It’s but natural for them to get angry as I have prevented them from looting public money. Consequently, they have now formed an alliance called Mahagathbandhan,” he said.

As many as 22 opposition parties leaders are attending the mega rally convened by Trinamool congress chief Mamata Banerjee at Brigade Parade Grounds in Kolkata. Addressing the crowd, senior Congress leader Mallikarjun Kharge said that if the opposition parties don’t unite, PM Modi and BJP president Amit shah’s reign will continue. He said that the BJP is destroying the country’s institutions, adding that their only aim is to win the elections.

West Bengal CM Mamata Banerjee said the Opposition will work together to ensure that the Narendra Modi government is defeated in the upcoming Lok Sabha elections.

After the rally, the leaders will chalk its strategy to dethrone the BJP at Centre. Meanwhile, among political bigwigs that have already reached Kolkata for the rally include N Chandrababu Naidu, Omar Abdullah, HD Kumaraswamy, HD Deve Gowda, Akhilesh Yadav, Shatrughan Sinha among others. “You will witness how big the representation will be this year from all regions. Heavyweight national leaders, including a former Prime Minister and ex-Chief Ministers will attend this meeting," Banerjee said earlier. Five massive stages have been set up at the venue with the main stage, opposite the Victoria Memorial Hall, will accommodate senior leaders including Mamata Banerjee.On the right of the main stage there will be two stages, one for the MPs and State Government ministers and the other for the district presidents and functionaries.The party workers who started coming to Kolkata from the districts from Thursday, January 17 are being accommodated at Gitanjali Stadium, Khudiram Anushilan Kendra, Sector V and Central Park, Salt Lake and in dharamshalas in central and north Kolkata. From these places, the supporters will start marching towards ground zero at 6 am.A thousand-strong group of folk artistes from Jhargram will also take part in the rally. There will be around 100 camps spread across the city to assist the attendees. More than 2,000 party supporters will be engaged as volunteers.