"She [the Unnao rape victim] suffered a cardiac arrest at 11:10 pm and we tried to resuscitate her, but she could not survive and at 11:40 pm, she died," Shalabh Kumar, HOD (burns and plastic), Safdarjung Hospital. 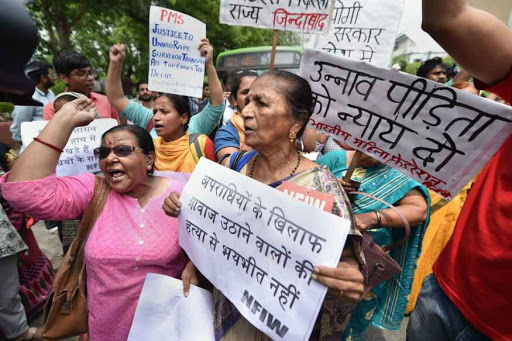 The 23-year-old woman was attacked outside the Sindupur village in Unnao district when she was on her way to a court in Rae Bareli to attend a hearing in the rape case. The five men, who burnt her on Thursday, also included the two who were accused of raping the woman in December.

On Thursday, the victim had given her statement to the magistrate. In her statement, the Unnao rape victim had named five persons who burnt her. The woman had said that she was beaten up by the five men who then stabbed her and burned her alive.
The Unnao rape case refers to the gang rape of a on 4 June 2017 in Unnao, Uttar Pradesh, India. To date, two charge sheets have been filed in the case. The first charge, filed by the Central Bureau of Investigation on 11 July 2018, accused Kuldeep Singh Sengar, an expelled former Bharatiya Janata Party (BJP) leader and Member of the Legislative Assembly (MLA) from Uttar Pradesh, of the rape. The second charge sheet was filed on 13 July 2018 and accused Kuldeep Singh Sengar, his brother, three policemen and five other individuals of framing the Unnao rape survivor's father as the perpetrator.

These incidents brought public attention to the case, and the incident was widely reported on in the national media in April 2018. The Kathua rape case received national attention during the same period, leading to joint protests seeking justice for both victims.

Following a truck collision on 28 July 2019, resulting in the serious injury of the victim and death of two relatives, it was revealed that the family had been threatened and had written the Chief Justice of India for help. On 31 July 2019, the Supreme Court and Chief Justice acknowledged the case.

The victim stated that she was lured by a woman named Shashi Singh, her son, Shubham Singh, and her daughter, Nidhi Singh, to move to Kanpur with the allurement of securing employment. On the night of 11 June 2017, she went with Shubham Singh and later was allegedly raped multiple times by him and his driver, Awdhesh Tiwari. She was later assaulted by unknown individuals and allegedly sold to one Brajesh Yadav for â‚¹60,000. A First Information Report (FIR) was registered under section 363 and 366 of the Indian Penal Code (IPC) on 20 June 2017 against Shubham Singh and Awdhesh Tiwari. A day later, Uttar Pradesh Police located the victim in a village in Auraiya and sent her for a medical examination. On 22 June 2017, she recorded her statement in front of a Judicial Magistrate under Section 164 of the Code of Criminal Procedure[13] (CrPC) in which she narrated her ordeal and named Shubham Singh, Awdhesh Tiwari, Brajesh Yadav and other unknown assailants for abduction and gang rape. A second FIR was registered later under the Protection of Children from Sexual Offences Act (POCSO) and the accused were subsequently detained.

Her statement was recorded by the police on 22 June 2017, but the police did not allow her to name her assailant. On 5 April 2018 the woman's father was arrested and placed in judicial custody, allegedly after he was assaulted by supporters of Sengar. A medical examination found injuries consistent with his having been beaten. He stated that Sengar's brother Atul Sengar had led the assault; no action was taken in response to this complaint at that time. Four days later, the victim attempted to immolate herself in front of the residence of Yogi Adityanath, the Chief Minister of Uttar Pradesh, stating that the police had taken no action against the accused. A day later, on 9 April, her father died in hospital of his injuries, leading to the arrest of Atul Sengar and the suspension of six police officers. The death and the immolation attempt led to widespread outrage, after which an FIR was registered against Sengar. The state government handed the case over to the Central Bureau of Investigation. The case was shifted to the Allahabad High Court.

On 13th April 2018, Kuldeep Sengar was taken in by the CBI for questioning. Later in the day, on the basis of the Allahabad High Court order, he was arrested and spent a week in judicial custody, and new FIRs were registered. A second arrest in the case was made on 14 April 2018 of Shashi Singh, who allegedly took the survivor to the BJP MLA on the same day as the incident.

The Unnao rape victim's uncle, who had started a campaign accusing Kuldeep Singh Sengar of the rape of his niece and the death of the rape victim's father, his elder brother, in custody, was arrested on 21 November 2018 in an 18-year-old gun-firing case.

On 28 July 2019, the rape victim and her lawyer were seriously injured and two of her family members died when a truck struck their car. The truck had blackened license plates, and the police officers assigned to provide security for the victim were not present, with the explanation that there was no space in the car in which the victim was traveling.[25] These circumstances have led to the wide suspicion of a conspiracy to eliminate the witness and her family.

The Chief Justice of India was anguished by the events and, in view of the situation, the CJI-led bench of the Supreme Court ordered the transfer of a total of five cases related to the Unnao incident to Delhi in the court of the District & Sessions Judge, West District, Tis Hazari Court, and also directed protection to the victim's family members, her lawyer and his family members. The victim was also awarded â‚¹25 lakhs as interim compensation to be paid by the Uttar Pradesh Government.

Further, on 2 August 2019 the same bench also directed that Mahesh Singh, uncle of the rape victim and said to be a key witness in the case, be transferred to Tihar Jail in Delhi from Raebareli Jail where he is currently imprisoned.